How Strong Patents Make Wealthy Nations is an excellent paper that provides overwhelming evidence that patents create economic wealth.  The paper has two excellent charts.  The first chart shows the strength of a number of countries patent systems versus their wealth. 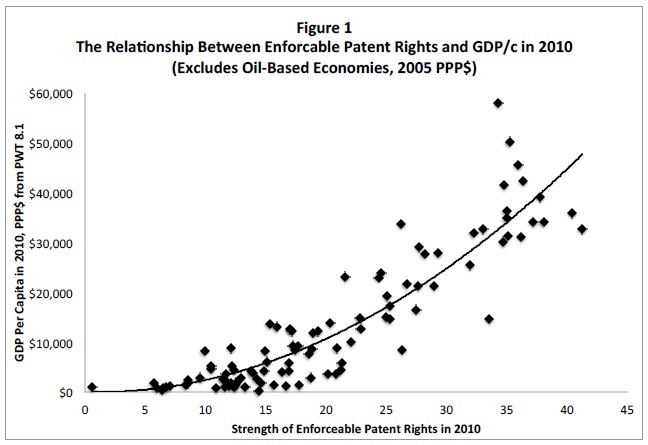 The second chart compares the per capita GDP of the U.S., Great Britain, and Brazil from 1700 until 1913.  The U.S. and UK had patent systems, while Brazil did not and Brazil and the U.S. became independent about the same time.  The result is that Brazil’s per capita GDP hardly changes while the U.S. and UK experience an over five-fold increase in per capita incomes from 1800 to 1913. 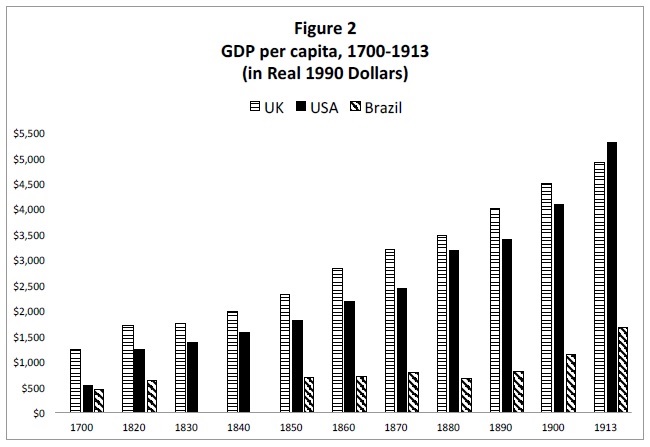 This paper has important implications on economists Paul Romer’s work.  Paul Romer is one of the leading new growth economists and is often mentioned as likely future recipient of the Nobel Prize in economics.  Romer and Robert Solow have shown that increasing levels of technology are the only way we increase real per capita wealth.  Romer contends that property rights for inventions (mainly patents) are always a bad trade-off.  He argues that strong patent systems encourage the creation of new technologies, but they inhibit the dissemination of new technologies.  His reason for this position is based in his belief in the theory of “pure and perfect competition.”  Alternatively, weak or non-existent patent systems result in good distribution of new technologies but they are poor at creating new technologies.  It is clear that this paper provides significant empirical evidence that Romer’s idea that property rights are always a bad trade is incorrect.

I have one minor criticism with this paper.  The authors argue that the patent system in the U.S. helped manufacturing.  Manufacturing is not what causes increases in our per capita income and inventions sometimes hurt manufacturing.  For instance, digital printing and the Internet have completely destroyed the manufacturing side of the publishing industry and 3D manufacturing has potential to do the same thing to manufacturing in other industries.  The question is not whether patents help manufacturing, it is whether it makes us wealthier.