I was having a discussion with Objectivist colleague about the Austrian Economic idea of subjective value.  In economics the subjective theory of values (STV) was developed in response to the classical economic ‘labor theory of value’.  The labor theory of value states that the value of an item is equal to the sum total of the labor that went into making it.  Thus the value of your computer is equal to the total amount of labor used to produce it, including all its components.

The Austrians, particularly Carl Menger, explained that this was clearly incorrect.  In response he said the value of a thing is determined by each person’s own mind.  Most economists today adhere to some sort of subjectivist theory of value.

Ayn Rand, in Capitalism for the Unknown Ideal, discussed the differences between intrinsic, subjective, and objective theories of value.  In my opinion it was her way of making it clear that she disagreed with her friend Ludwig Von Mises.

The subjectivist theory holds that the good bears no relation to the facts of reality.

The intrinsic theory holds that the good resides in some sort of reality, independent of man’s consciousness.

The objective theory holds that the good is … an evaluation of the facts of reality … according to a rational standard of value.

(Ayn Rand Lexicon “What Is Capitalism?” Capitalism: The Unknown Ideal, 21)

The Subjective Theory of Value (STV) in economics results in economics being a subjective social ‘science’, instead of an objective, true science.  It is important that we define what Austrians’ mean by the STV.  They mean that people’s economic choices are not connected to reality.  People have subjective values that they attempt to fulfill and we cannot say whether a person’s economic choice is correct or rational.[1]

According to the STV we could not say that if Robinson Crusoe’s choice to trade his canteen of water for a gold doubloon to the only other survivor of a shipwreck, when there is no potable water on the island and no foreseeable chance of rescue before Crusoe dies of dehydration and no foreseeable chance of rain before Crusoe dies of dehydration, is irrational.  We cannot even make this decision if we know that Crusoe’s goal is to stay alive and he has no connection to the other survivor.

If we take the STV seriously, then I can be rich if I just subjectively believe that my slum house in a decaying part of Detroit is worth $200 million.  Value is all subjective, so as long as I firmly hold to this belief then I will suddenly be wealthy.  Pointing out to me that the market value of my house is only $15,000 is founding your opinion “upon an arbitrary judgment of value.”

The macroeconomic evidence does not support the idea that people make arbitrary economic decisions.  The wealthier people are the longer they live on average.  If peoples’ decisions were truly subjective (disconnected from reality) then we would expect that there would be no correlation between wealth and longevity at least for those people living above the subsistence level.  But in fact, there is a strong correlation.  There is also a strong correlation between wealth and a number of factors related to the quality of life.  This shows that people are not spending their money arbitrarily (subjective valuation), but spending it on things that enhance their longevity and their life.[2] 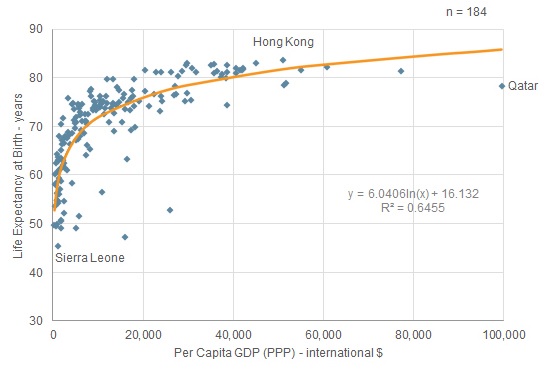 Some people suggest that once people are above the subsistence level of living then economic decisions become subjective.  The evidence does not support this point of view either.  People who are wealthier tend to drive safer cars, have better built houses that can withstand natural disasters better, have better access to high quality health care and so on.  Very few people are wealthy enough to afford the highest quality goods and services for the rest of their lives.  Clearly, the wealthier people are the more they can afford to indulge some of their whimsies, however if they make enough irrational economic decisions they will not only go bankrupt, they will die – see Venezuela.

Wealthier people are also happier.  There are some old studies that attempted to show that additional wealth/income above a subsistence level did not increase people’s happiness (The Easterlin Paradox).  However, more recent studies have shown that increasing levels of wealth do correlate with increasing levels of happiness.[3]  The original studies were clearly biased and trying to make a political point.

Several of the ideas of Austrian economics are actually inconsistent with the STV[4]  For instance, how Austrians explain marginal utility implicitly shows that they understand peoples’ economic decisions (values) are not arbitrary.  The most common way Austrians explain marginal utility is to explain that if they have one unit of water per day they will use if for drinking.  If they suddenly have two units of water per day they will use the second unit for watering their garden, which they value lower than drinking.  If they then find they have three units of water per day, then they will use the third unit for washing.

Why do Austrians always select drinking for water as having the highest priority?  Clearly they inherently understand that people have to drink to stay alive (an objective – reality based decision) and that drinking water is more important than washing if the person wants to live.

Another example is the Austrian Business Cycle (ABCT).  ABCT argues that we grow wealthier when we invest in (purchase) “higher order goods”, which is just a fancy way of saying increasing our capital.  Thus they are arguing that purchasing capital goods has a higher value (economic and moral) than purchasing consumer goods.  Some Austrians recognize the contradiction and try to dance around it by saying that economics can tell you what the result of certain policy actions will be, however economics cannot tell you which choice you should make.  This is like a doctor telling you that a poison will kill you, but the physician cannot tell you that you should not ingest it.

Economic and moral values are not separate and cannot be isolated.  Both are based on the objective nature of man.  Austrians by choosing a STV for economics are logically compelled to the conclusion that ethics is subjective.[5]  The STV also condemns economics to the category of a social ‘science.’  Only by rejecting the STV and replacing it with an objective theory of value can economics be an objective science.

[1] If human action always aims at a purpose, which by definition it does, then human action must be rational, that is, consistent with reason or guided by one’s will and intellect. It can never be termed irrational.

In making this point, Mises in Human Action (p. 19) writes “Human action is necessarily always rational. The term ‘rational action’ is therefore pleonastic and must be rejected as such. When applied to the ultimate ends of action, the terms rational and irrational are inappropriate and meaningless. The ultimate end of action is always the satisfaction of some desires of the acting man.”

Seemingly irrational action is rational, that is, has an aim. To appraise it as irrational, the appraiser merely imposes some other external source of value. Mises writes (p. 104): “However one twists things, one will never succeed in formulating the notion of ‘irrational’ action whose ‘irrationality’ is not founded upon an arbitrary judgment of value.”

[2] Of course it is entirely possible that Von Mises (see footnote 1) believe trying to stay alive is an arbitrary choice.

[4] Austrians tend to have a very fluid definition what they mean by the STV.  They shift the definition based on the discussion they are involved in and use the one they believe will make their argument most effectively.

[5] Murray Rothbard tried to span this contradiction.  A likely result was the non-sense of anarcho-capitalism.